What is Kanban: and why is it useful?

The Kanban system got started in 1950s on the manufacturing lines of the Toyota Corporation.
Afterwards it moved on to offices to become an essential tool of project managers.
The boundless flexibility of Kanban in practice and its capacities for self management of teams
have ensured efficiency where other approaches failed. In this very case, the system’s identity
card established itself as basically a card which further developed into the internal currency at
facilities with Kanban adopted.

Similarly to the Lean manufacturing concept, the Kanban system was elaborated by Toyota
managers. Taiichi Ohno, a Japanese industrial engineer and the author of the system, got inspired by the operating principle of American supermarkets where the buyer himself chose products he needed. The warehouse played the role of such «supermarket» in the Toyota Corporation.
Workers there exchanged signal cards (word-by-word translation of Kanban from Japanese) and thus controlled the manufacturing process on their own.
The cards were attached to containers with parts. Such tags indicated the following details: the
numbers and quantity of parts, the department sending them and their destination. The worker directly involved in vehicle fitting and assembly (downstream) took parts from the containers with an attached «Kanban» indicating a request for the warehouse. The card was taken off to be transferred, together with the empty box, by a transport worker to the warehouse where another worker had already prepared another container containing parts with a «production Kanban» tag attached to indicate data of parts produced.
Such production Kanban was replaced with a request Kanban addressed to the warehouse to be subsequently sent to the parts manufacturing line (upstream). Thus only the amount of parts
indicated in the card was manufactured. Containers with new parts were delivered to the fitting
line for transport workers. 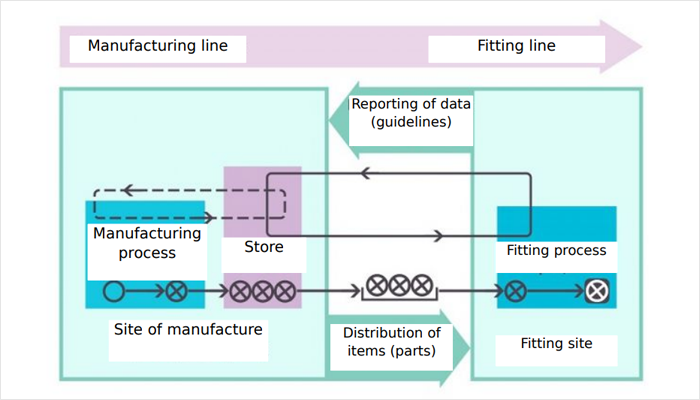 Kanban is an «extending» system. It creates a balance between continuous flow to eliminate costs for expectation on the one hand and the minimum amount of work in progress (WIP) on the other, which finally reduces any risk of surplus production. WIP is regulated by means of cards: their number is fixed, and their instructions guide downstream workers.

The strict tag attachment rule works as the energy conservation law. The WIP limit is specified in
proportion to the number of Kanban cards calculated based on the level of sales and statistical
variance in current processes. The maximum amount of tags which represents that very «system
energy» fixes the top level of WIP within any given timeframe. WIP is also limited by the
extension principle: the upstream output rate depends on the downstream rate of production.

The chart apparently shows that Kaizen culture is one of the elements underlying the system.
Self-sustainment of processes and standard variance relieve the management of continuous
control, thus it becomes possible to focus on improving workers’ performance.

Using Kanban in IT

The Kanban system penetrated into the software field while continuing to generate value on
manufacturing conveyors.

However cards indicating such details as deadlines, process description or number and theтexecutive’s name are now attached not to containers with parts, but to the board featuring the following columns:

Backlog — tasks due to be implemented
A limit number is usually indicated above a column to designate the maximum number of
processes in it. The backlog limit is calculated based on the lead time. If 5 works are in progress,
and each of them can be completed within 1 day on an average, then the backlog may also be
limited to 5. 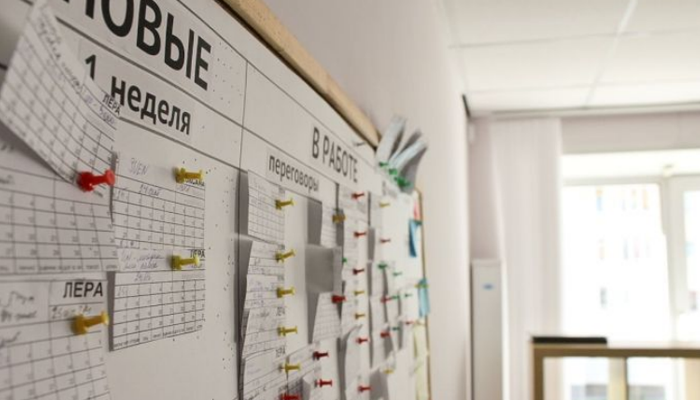 The above structure is not strict — you may improvise and add columns depending on specific features of your project. Kanban systems requiring task readiness criteria to be determined before task execution are often the case. In such case, two columns named in English as specify (i.e. clarify parameters) and execute (i.e. start work) appear. 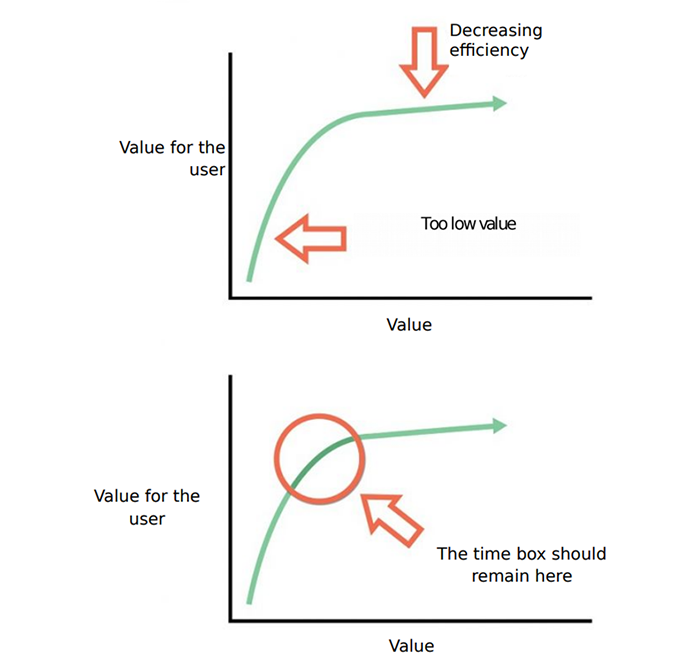 Kanban has the following advantages:

In practice, the system shows excellent performance in such non-core operations as:

Kanban also has its disadvantages:

Just as Agile Kanban, Scrum is a flexible methodology, and it is also often used in the IT field. At
first sight, the difference between them is not apparent. There are many similarities, e.g. both
approaches provide backlog.

Examples of Use in IT

With Microsoft straightway: Kanban debut in the field of software development

The Kanban fundamentals found use in the field of information technologies just over 10 years
ago. David Anderson, one of the major Kanban advocates for software developers, was consulting the Microsoft Company in 2005. One of the company’s subdivisions, XIT Sustained Engineering which was in charge of troubleshooting in internal applications, caused discontent. By the beginning of the reporting year, that subdivision appeared to be the worst one within its department. The backlog exceeded 5 times the admissible volume, and the duration of processing one request — lead time — usually took 5 months.
Anderson’s consulting enabled the new PM to increase the problematic department’s performance by 155% over 9 months. The lead time was reduced to 5 weeks, the backlog regained its normal volume, and timely execution of tasks was fixed at the level of 90%. All these results were achieved through minimum involvement of new specialists, and the personnel continued to correct program errors by using the same methods — only work arrangement approaches changed.
Interesting case: Dragos Dumitriou, a software manager who undertook to reverse the situation in XIT, was absorbed in Anderson’s book just at that time. To his surprise, he met the ideologist of software Kanban in the Microsoft Company where the latter had been employed shortly before. Dumitriou asked Anderson to assist him with his task, and Anderson agreed to apply the principles described in his book in practice.
Dumitriou found a department comprising three developers and three testers whose backlog had accumulated 80 requests. The PM’s appointment was temporary since the job requirements included the ability to handle the ASP technology, SQL Server administration and knowledge of MS Project Server. The top management envisioned «a tech worker» for this position, capable of programming and responsible for generating reports and predicting backlog loads. The department’s problem was believed to be discovered provided that a considerable data massive was compiled. Dumitriou was not such «tech worker» indeed.

However after starting to analyze the XIT operation with Anderson, he quickly discovered the key factors which negatively affected the department’s pace: 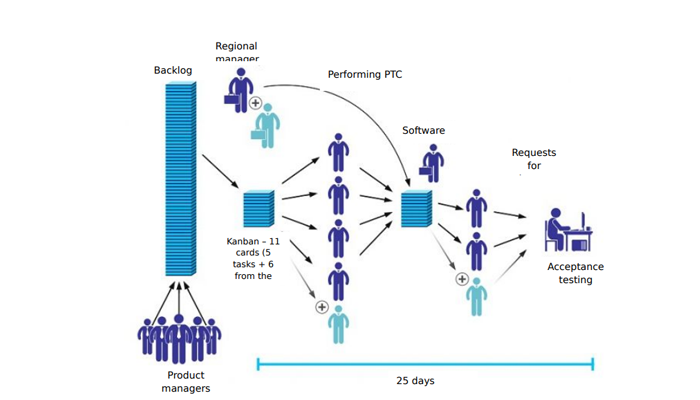 According to the summary of 2005, the subdivision’s productive capacity grew by 155%. To further improve XIT’s performance, two more specialists were involved: one developer and one tester. The number of backlog requests decreased to 10, and one developer consistently processed 11 requests per quarter. 56 requests per quarter were completed versus previous 11. The request cost dropped from $7500 to $2900.

When Used by Corbis

Having succeeded in Microsoft, Anderson proceeded to solving a new complex problem in 2006.
At that time, he was working in Corbis — another company of Bill Gates who had not quitted
from MS yet. One of Corbis’ activities was photograph licensing. At that time, it was the second
largest photo stock in the world with the base numbering about 3.5 thousand pictures.
Anderson’s objective was to speed up the company’s main releases. The interval between the
releases was three months, and it could grow even more. The release plan discussion alone took two weeks of managerial work. It was necessary to align the output of secondary releases or updates every two weeks. At the same time, the key resources had to be targeted at implementing the main project.
The Corbis office got a Kanban board which became the venue for Anderson’s daily talks with the staff. The PM’s purpose was to improve visual monitoring of processes, to foster selfmanagement and to strengthen the executives’ personal accountability.
The Kanban system was also targeted at loosening managerial supervision and boosting the
productive capacity. 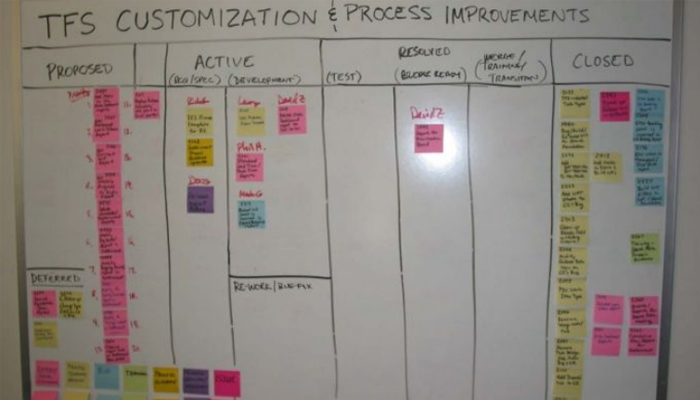 Apart from multicolored cards and graphs, a «waste bin» appeared on the board to collect
oversized tasks. 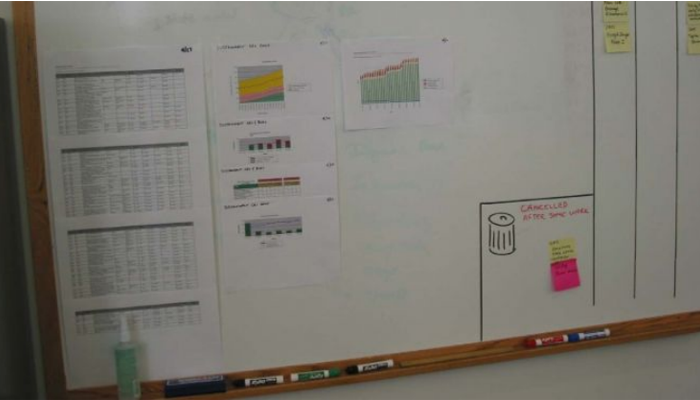 The Kanban system clarified the points where workflows were no longer smooth and where
delays occurred causing a so-called bottle neck. Prompt team discussions facilitated the discovery of current problems. For instance, the testing procedure lasted for 3 days, which negatively affected release timeframes. Three specialists united to find the way reducing that time to 24 hours.
The bottle neck is a fragment of a company’s workflow chart or algorithm where limited resources of people’s efficiency slash the task flow capability. Labour scarcity, bad Internet or director on leave — all these factors disable or slow down task execution.
Limits for Kanban cards were empirically established twice. In the «ready for development»
column, limits were not increased. A new column — «ready for testing» also appeared. Many
downstream requests were articulated incorrectly, which caused time overspending. Thus the PM investigated the upstream workflow and found errors there. Request processing could take 100 days, but anyway releases became regular — once per two weeks, as planned. Decisions on release content were made 5 days before publication. As in Microsoft’s XIT subdivision, the practice of calculations was shifted in favor of productivity.
Tasks were prioritized based on the «cost of delays» or readiness of resources. Not only did the Kanban system enable Anderson to achieve the purpose, it also ameliorated the climate in the personnel. Due to joint discussions and visibility of processes, team members became profoundly confident in each other. The personnel also adhered to Kaizen, which is the practice of continuous improvement.

Applications and Programs for Kanban 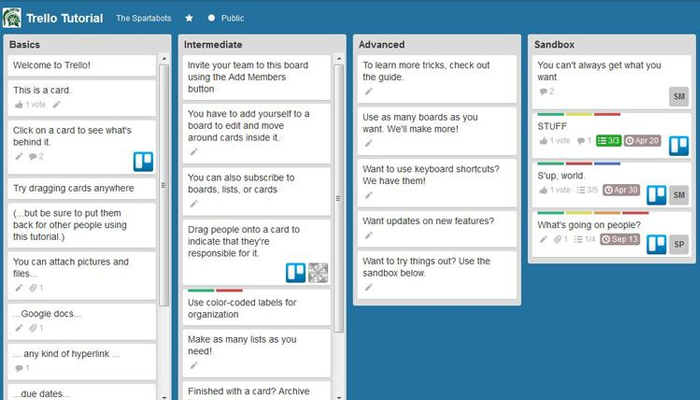 It is a popular Kanban system for task management. It differs by visual attractiveness and convenient interface. Users note its superflexibility. 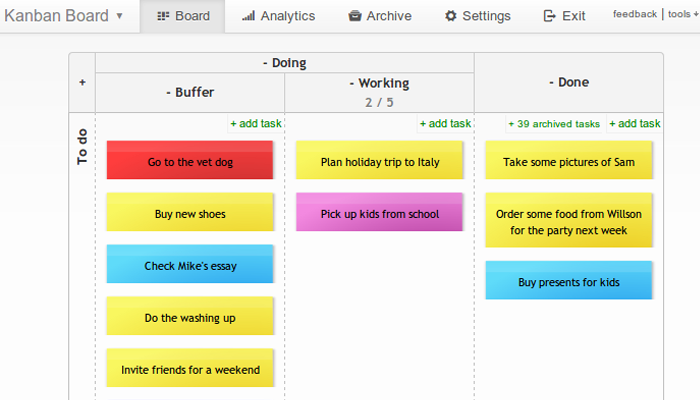 It represents a board free of charge for two users. It also offers support for API and touch interfaces. 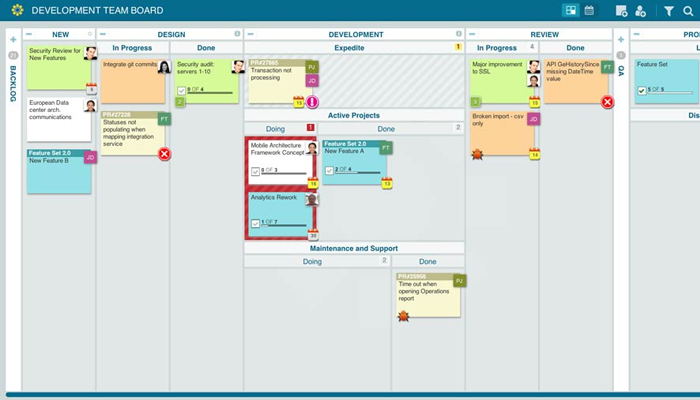 It is a board free of charge for five users, which provides good realization of joint work. It also
offers API support, enables import/export and provides good statistics. 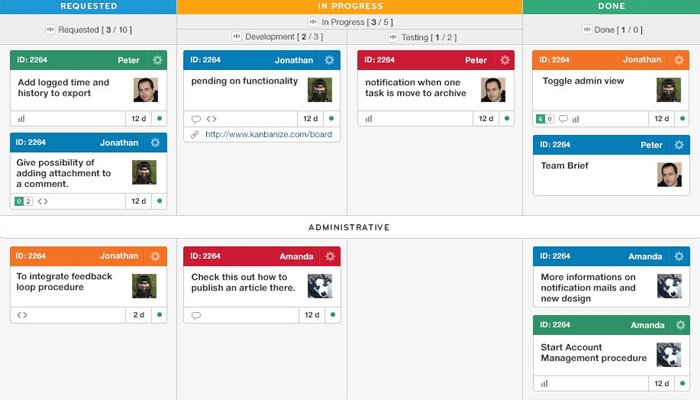 It is a completely free service with adequate functionality. Its owners warrant productivity increment by 300% when their application is used.

It is a Ukrainian saas application for swift project tracking and management. In addition to financial accounting, deadlines and Gantt chart, its functions currently include an adjustable Kanban board.

Kanban is the practice which helps to succeed with no necessity to use only agile methods.
Significant changes are achieved through eliminating time losses, due management of narrow
spaces with reduction of variability.
However effective changes require time. They are gradual, and the team’s resistance against
novelties is minimal. The Kanban system motivates teams to get upgraded without altering their
engineering methods.
Kanban
Share
Add comment
esc
Share
или
Copy the invite link
PM school
Business management systems which are worth using today
Process automatization, business tasks managing, employees and agents calculating, eliminating the effect of human errors where possible – business management systems contribute to all of this. The most...
17 July 2022   •   21 min read
PM school
Best 41 Productivity Tools That Will Make Your Life Much Easier
Productivity is an important economic value that actually shows the cost-benefit ratio. It depends on many factors, due to which it can be both increased and decreased. Today, the best practice to manage...
12 July 2022   •   18 min read
PM school
The Best Task Managers for Teams in 2022
Task management systems clearly make teamwork more coherent. They significantly accelerate the resolution of different issues, such as missed deadlines, poor team collaboration, resource forecasting,...
8 June 2022   •   19 min read