From amongst numerous questions eventually arising in every project, one issue is outstanding: what is the best way to manage the product development process? What particularly comes to mind is Waterfall — one of the options proven over the years (or a cascade waterfall model to manage software development).
As a matter of fact, this methodology is being severely criticized now, but is it really so bad, or once again we will figure out that history repeats itself?

Each and every team of developers can either create its own software life cycle model or use something which is generally acknowledged. One of the options is Waterfall. An American V.U.Royce is considered to have founded this model. He was rumored to have borrowed many things from his colleagues by taking credit for their work. It took place in 1970. Up to this day, the method presented by Royce is used in many projects either in its original version or modified.
However some IT insiders claim that such methodology has never existed:
«As an IT professional and teacher, for more than 40 years have I heard many myths about the IT industry. But what keeps me surprised is the reason why the word „Waterfall“ is still used to describe a non-existing methodology, and why creators of development methods and systems use it as an object for comparison.»

It is weird to hear such thing about the methodology which has been used for decades in software development for various activities, such as the automotive industry, construction of buildings and structures, finance&accounting, medicine and electronics.

The main fundamental principle of the Waterfall model for software development is that every subsequent step cannot be started unless the previous one is completed. At the same time, no arbitrary moves forward or backward are allowed, and phases should not overlap. This is the basic thing that distinguishes the cascade methodology from amongst its agile peers (or rivals), such as Agile, DSDM, Scrum or FDD.
Action Algorithm in Waterfall 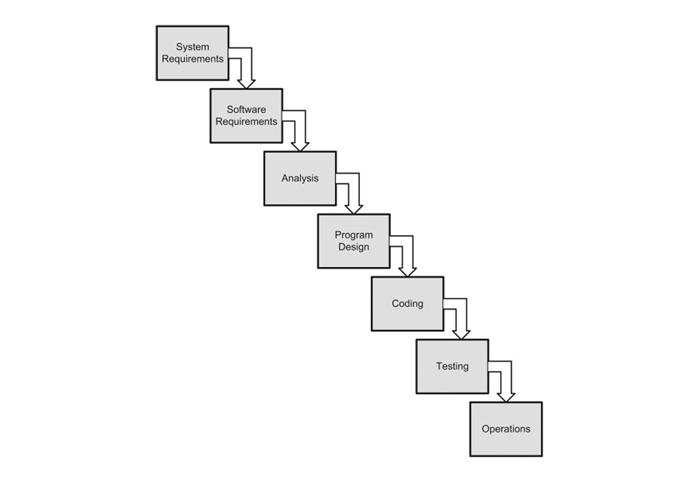 To understand Royce’s ideas underlying the model you may study his original work:

Conceiving and discussing an idea

This phase does not include development basically. Just a certain new idea interesting for one or more persons is considered.

This phase includes the most detailed specification of the customer’s requirements for the project. Ways to reach the goal are determined; deadlines for operations are outlined along with the financial aspect. At the same time, a certain time and money reserve is spared for each work unit. When the analysis of requirements is completed, a technical assignment for programmers and a budget are ready.

This phase encompasses writing a code conforming to the documents previously drawn up.

Specialists test the final version of the product under conditions close to reality by recording bugs in it. The most critical ones for general software operation are fixed, less significant ones may remain without fixing if the time is expired or if the budget is spent.

The resulting serviceable software product comes into use according to its intended purpose with support provided. That means making sure the product is serviceable, fixing failures, planning functionality upgrades based on users’ feedback.

All the above phases are implemented in a strict sequential order, and their results are recorded.

To understand the evolution of the classic Waterfall methodology described above, you may study the Project Management Body of Knowledge. The 3rd and 4th versions have a number of discrepancies which will help to understand the «cascade» path.

Advantages and disadvantages of the cascade model of software development

Unfortunately, nothing is perfect in our world, thus the cascade methodology also has both strong and weak points.

How to use the cascade development model and in what cases?

According to the practice, the Waterfall model of software development is quite relevant in the following cases:

To understand possible motives for abandoning the cascade methodology, you may read the
book Scrum. The Revolutionary Method of Project Management by Jeff Sutherland.

Examples of Waterfall in use

The pure cascade model is not so much widespread in modern development, and very often
what cannot be classified as Agile is named Waterfall, thus it is quite difficult to determine where this very methodology is used.
According to experts, a significant part of ERP systems and programs designed for construction, medicine, operations under governmental contracts, industrial use or for similar fundamental applications, are developed by using a certainly modified Waterfall version.
Specific features of handling such projects are better understood with the book «Pattern-based Development of Enterprise Systems» by Sergey Zykov.
And it is logically justified. This was also described by Chuck Cobb, a mentor, trainer and the author of books dedicated to Agile methods in project management.

From amongst the companies where Waterfall is or was used, the following ones may be noted:

Applications and programs to manage development based on the Cascade Model

To handle Waterfall, you may use a range of products facilitating time tracking and capable of making up Gantt charts. 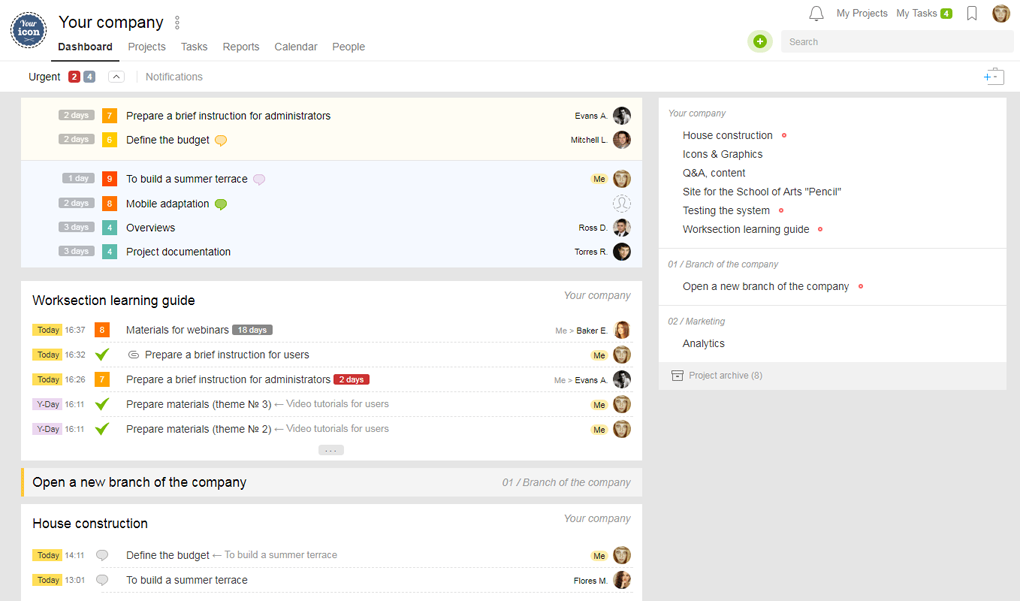 It is an attractive Ukrainian saas service offering a convenient mobile version.
It is suitable for careful scheduling due to the following features available:

Waterfall is a methodology used for quite a long time, and whatever criticizers say, it is efficient
in numerous cases.
At the same time, this approach is irrelevant in pure form for many projects requiring prompt responding to volatile market demands. Based on what is said by representatives of largely diversified companies, we may conclude that Waterfall deserves a role in contemporary projects. But using Waterfall is justified where requirements are constant and will definitely remain the same by the project deadline.
Waterfall
Share
Add comment
esc
Share
или
Copy the invite link
Business-cases
How to replace Russian task managers
On February 24, 2022, the Russian Federation launched a full-scale war against Ukraine. Russia has already been subjected to multiple sanctions by Europe, the United States and other countries that do...
23 March 2022   •   5 min read
PM school
Choosing a Task Manager in 2022
In recent years most companies have significantly changed their working environment. Pandemia, remote work and increased requirements to business efficiency push companies to searching for new solutions...
24 January 2020   •   8 min read
Business-cases
Sasquatch Digital: Any Type of Business Requires a Task Manager
About us: Digital agencyThe team consists of 15 persons9 years in the marketMore than a hundred of implemented projects55+ customers, including Libresse, Libero, ТЕТ, 1+1, ATB, Philips, Khortytsia etc...
7 November 2019   •   4 min read